After you join a workshop for making Edo-Kiriko cut glass, one of the Tokyo's traditional handicrafts at the Sumida Edo Kiriko-kan, visit to Ookawachiyama, famous village for the Imari-yaki Pottery. This journey will have enough of attractive both handicrafts. 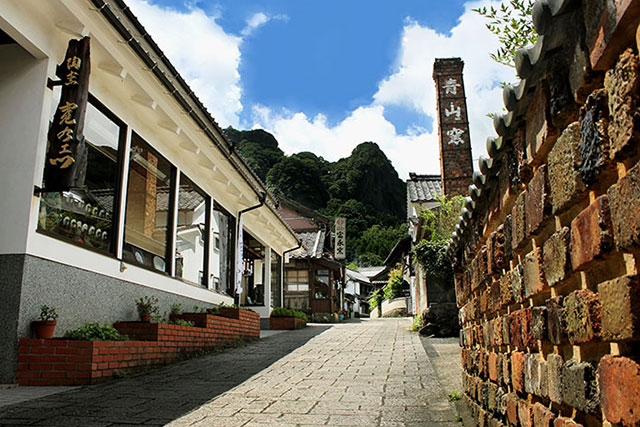 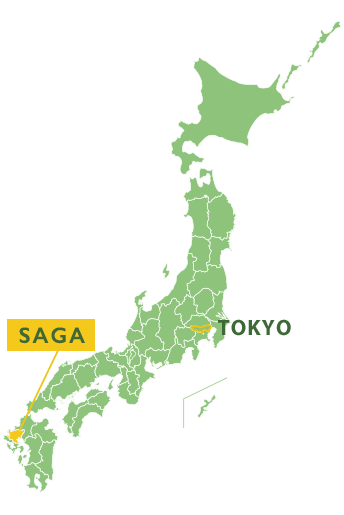 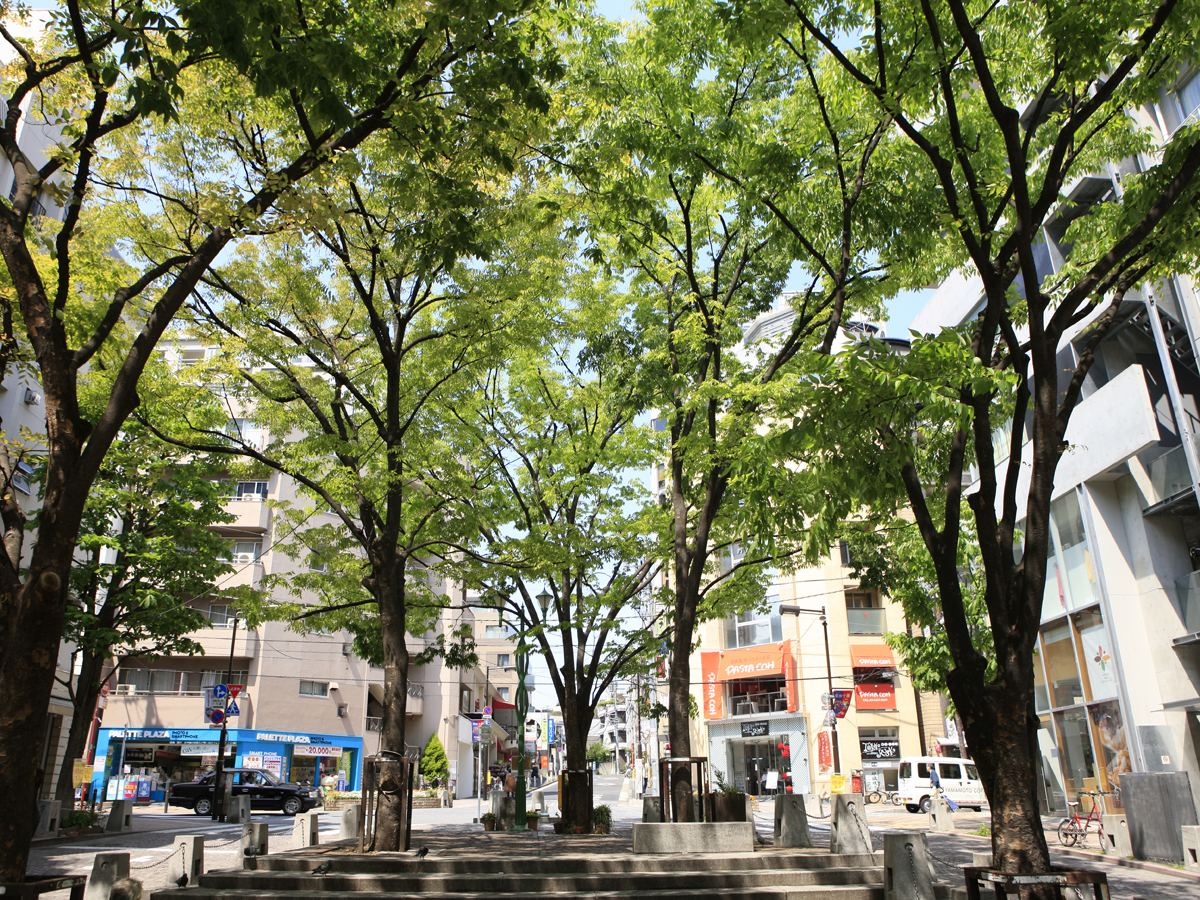 Azabu-Juban is an area that is popular among overseas tourists, as well as foreigners living in Japan. It is close to Roppongi, while retaining the atmosphere of Shitamachi (old Tokyo downtown). The shopping area in Azabu-Juban is a mix of new and historical shops, which keep people entertained as they stroll through the area.

From Kinshicho Station
About 6 minutes on foot 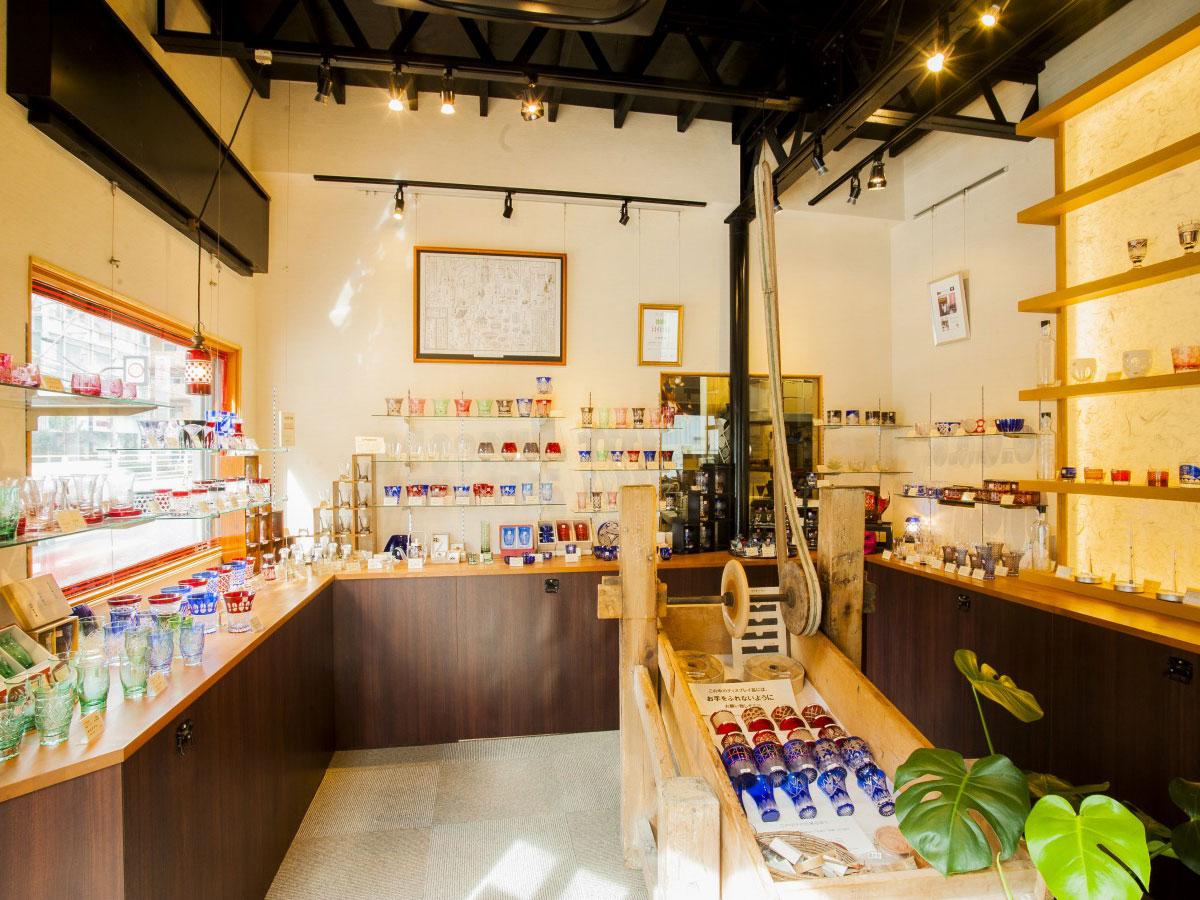 Sumida Edo Kiriko Kan is a specialty shop that showcases traditional Edo Kiriko glass.
In addition, the Sumida Ward-certified studio shop uses panels and exhibits to cover in detail the history and production process of Edo Kiriko, models of the different processes, and the traditional tools. The shop has over 350 Edo Kiriko items on display for sale, ranging from kiriko artisan masterpieces to vessels for daily use and other gift items, along with “waza,” or skill, items that can be found nowhere else.
Take a step past the shop window to watch the artisans in action up close, and try your hand at making your own simple kiriko glass. From Hibiya Station
About 2 minutes on foot Karatsu was once a castle town and bustling coal port. Karatsu Castle is the symbol of the town.

The former Takatori Residence and former Karatsu Bank symbolize the development of the coal industry. One can see exquisite floats lined up for the Karatsu Kunchi Festival at the Hikiyama Exhibition Hall.

The rustic look of Karatsu-yaki pottery is beloved by many. Okawachiyama of Imari City was once under the complete control of the Nabeshima clan, and on this mountain stood the clan kiln (hanyo) where masterpieces such as Iro-nabeshima, Nabeshima sometsuke, and Nabeshima celadon porcelain were created. Three sides of this village are surrounded by mountains, and the distinctive scenery, reminiscent of a landscape painting, is truly that of the “Village of the Secret Kiln.”
Within Okawachiyama is Nabeshima Hanyo Park, where the checkpoint station that protected the secrets of the porcelain, climbing kilns such as the Sutra Stone Kiln (Okyo Ishi Kama) and Kiyohara Kiln, and potters’ homes have been beautifully reproduced. 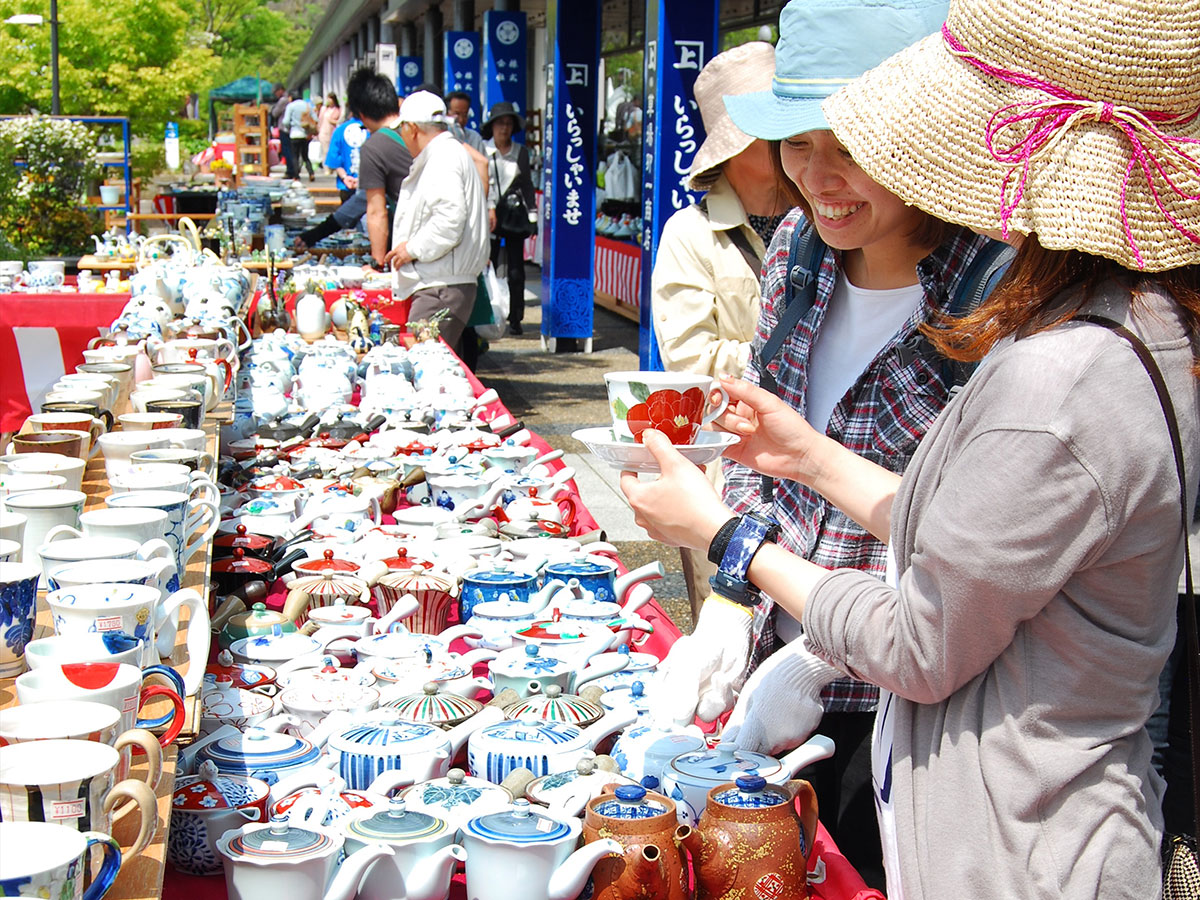 In the early 17th century, porcelain stone was discovered in the Arita area. Arita become the first place in Japan to produce porcelain and it has been the center of Japanese porcelain production ever since. In 1991, the Arita Uchiyama District was designated as an Important Preservation District for Groups of Historic Buildings. At Sueyama Shrine, visitors can view several porcelain structures such as the large Torii gate and the guardian dogs. 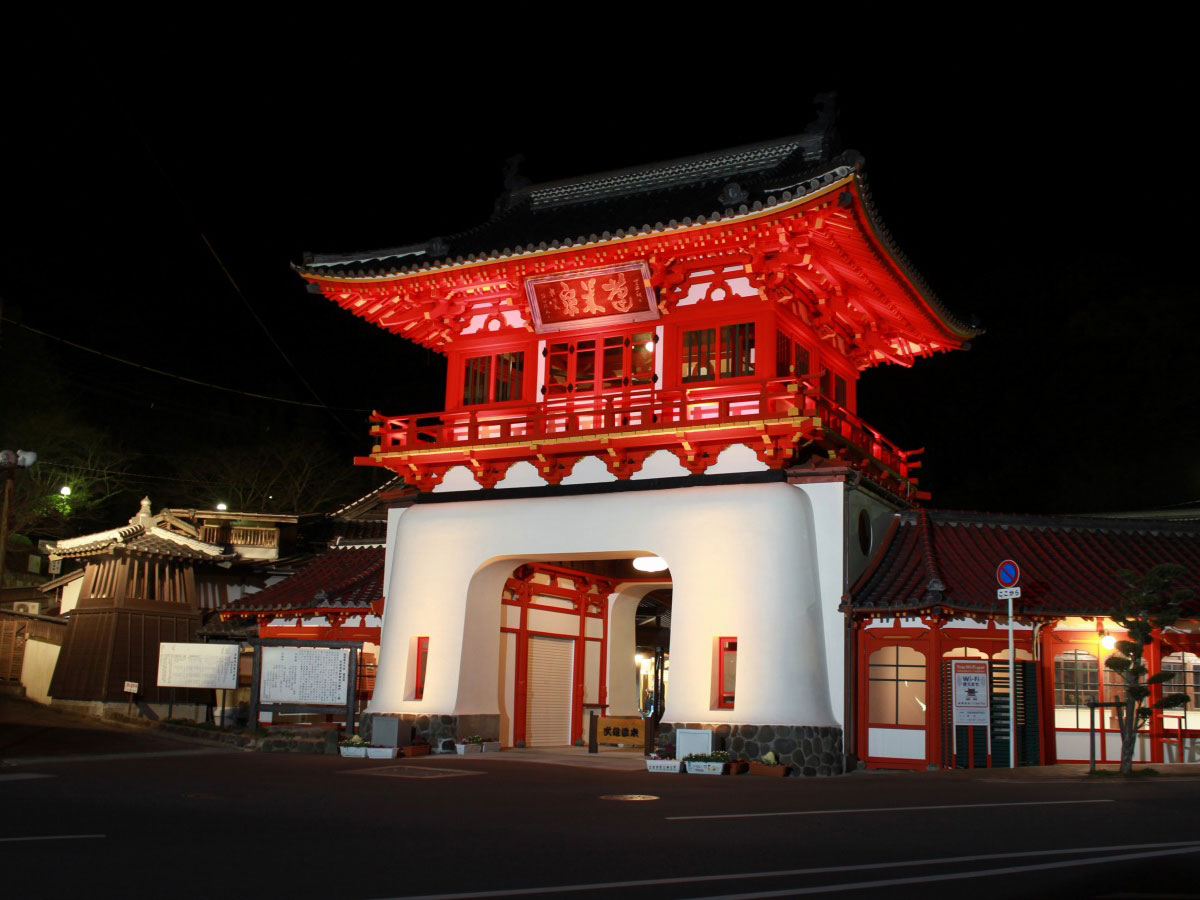 Takeo Onsen is an ancient hot spring that is characterized by the transparent, mild and moisturizing water.

The symbol of Takeo Onsen is the red-coated Romon (two-storied gate). This gate was designed in 1914 by the architect Kingo Tatsuno, who was born in Karatsu City, Saga Prefecture, and is famous for designing the red brick Tokyo Station building. 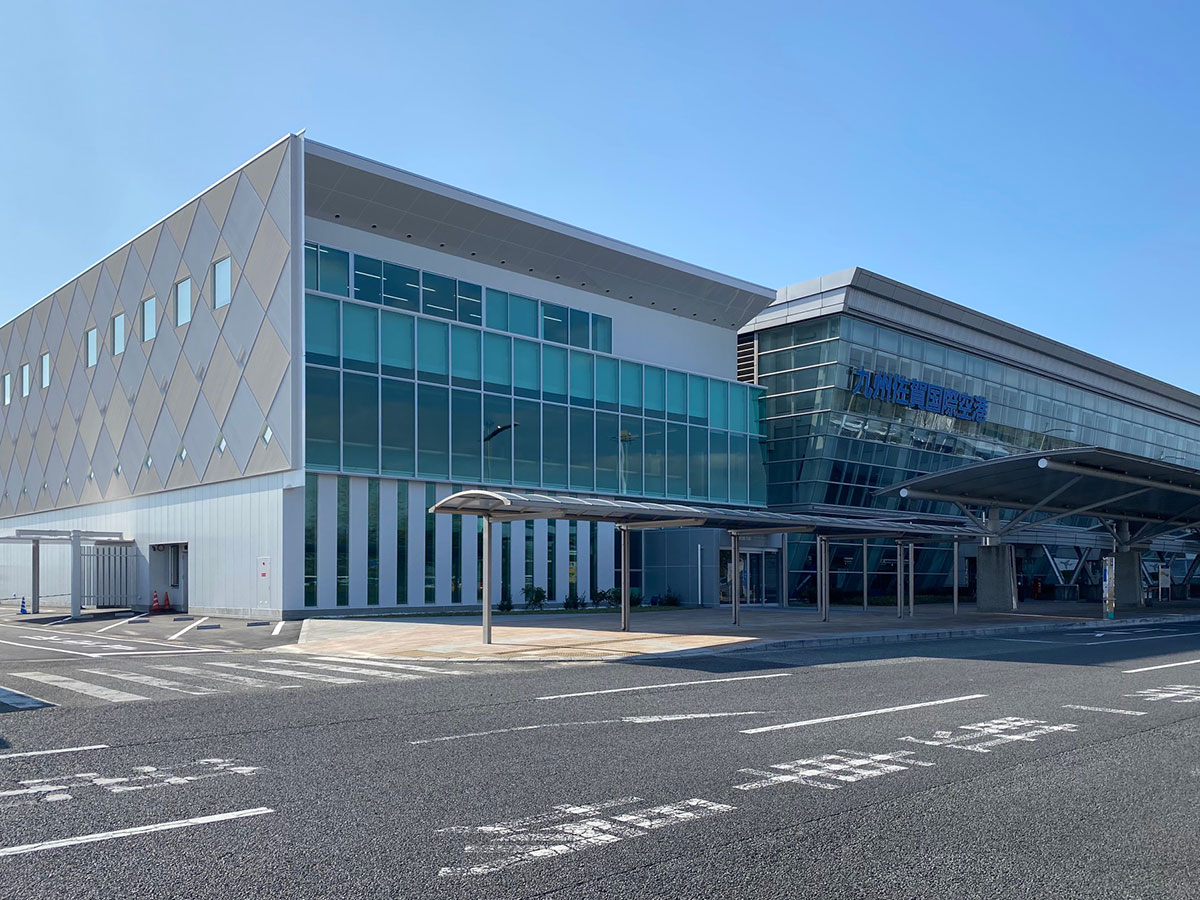 Kyushu-Saga International Airport opened a tourism information desk, with staff who can respond to English, Chinese and Korean natives, on the first floor in October 2021. In May 2022, it was certified as Category 3 on the Japan National Tourism Organization (JNTO)'s certification system for tourism information sites, the highest ranking of the system.
On the second floor, you will find Sagair, a souvenir shop with more than 1,000 carefully selected products from Saga Prefecture. Not only does it contain original brands like SAGASU, and the top-picked specialty goods, but you can also try a tasting of Saga's famous sake.
In the food hall on the third floor, there is a restaurant that lets you enjoy a meal while watching the planes go by, Restaurant Shino. The popular Saga specialty, Sicilian Rice, is topped with Saga beef that has been cooked in a special sauce, along with plenty of vegetables, and finally garnished with mayonnaise. Mix it all together and enjoy.

Let's embark on a trip of discovery and surprise, of Japanese artisanal products.
On this trip, we visited the dynamic city of Tokyo, and Saga Prefecture with its calm and gentle atmosphere.

I spent three days in Saga Prefecture, Kyushu, on this trip. This region offers a wealth of rich culture such as artistic ceramics. I took a trip to the most beautiful area I have ever been to in my life, observing the work of ceramics artisans and visiting a traditional Japanese home that has been designated as an Important Cultural Property.